"This article (Aisha Clan-Clan), or a section of this article, does not meet wiki standards."

Please repair this article so that it meets our standard. Add links, categories and images as well as expanding on information. See the talk page for more info..

"Who are you calling an animal?!"
—Aisha Clan-Clan to Gene Starwind[1]

Aisha Clan-Clan (エイシャ･クランクラン, Eisha Kurankuran?) is a Ctarl-Ctarl and former officer of the Ctarl-Ctarl Empire. Charged with the task of searching for the Galactic Leyline, Aisha hunts would-be outlaw, Gene Starwind and later joins his crew in search for answers.

Aisha was raised proud and noble, surrounded by a privileged family on her home planet of Ctarl-Ctarl. She grew up a happy young woman with plenty of friends. When she got older, she graduated with honors - a mark of prestigious regard among the Ctarl-Ctarl. She was given the rank of Officer within the Ctarl-Ctarl military, the title Ambassador and a position out in space. From there, she commanded the ship, the Orta-Honehone.

When the Orta-Honehone was en route to Blue Heaven, the crew aboard came across a ship that was at the time departing from Blue Heaven. Unbeknownst to Aisha, said ship was actually Horus, owned by the infamous outlaw "Hot Ice" Hilda. Due to her failure to detain Hilda, she was demoted from her position as Ambassador and left behind on Blue Heaven to search for information regarding the Galactic Leyline. Seeking revenge and Hilda's whereabouts, she tracked down Gene Starwind and company on Blue Heaven and attempted to forcefully interrogate him for answers.

After a short fight and a long chase, she exhausted herself by trying to utilize her full beast power. The crew decided to treat her to dinner out of sympathy, and, afterwards, she tried to attack Gene once more, prompting him to shoot her with his caster gun. As a result, she was left behind in the restaurant - incapacitated and with the restaurant bill.[1]

Searching for the Leyline

After being stranded on Blue Heaven, Aisha reappeared a while later in the crew's travels when Gene entered the Thirteenth Annual Heifong Space Race. When Gene tried to enjoy the pre-race party, they coincidentally met and instantly recognized each other before Aisha turned hostile. Being employed as a waitress at the party, she explained that she had hitchhiked from Blue Heaven all the way to Heifong, but before she could attack Gene, she was scolded by her boss and escorted out of the room by security.

Not long after the encounter at the pre-race party, Aisha tried to exact her revenge for a third time - this time during the Heifong Space Race. Captaining a participating Ctarl-Ctarl ship, she planned to intercept the Outlaw Star during the race and open fire, although this plan was halted when she learned that the Ctarl-Ctarl's ship was only a trading vessel, equipped with a single machine gun.

She persisted, however, and ordered the ship to send a distress signal to the Outlaw Star and purposely stranded herself in space to be "rescued" by Gene. Her plan was successful, yet also in vain, as Gene explained to her that he honestly knew very little about the Galactic Leyline, and that his only leads were the McDougall Brothers. Half-convinced and feeling unable to return to the Ctarl-Ctarl Empire, Aisha stayed on the Outlaw Star for the remainder of the race and planned to tag along on the search for the Galactic Leyline.

In Advance Guard from Another World, she volunteered as an exterminator for hire to kill a creature in the sewers that had attacked several workers, later revealed to be an large bug for five-hundred Wong, although if captured alive, its value was worth two-thousand Wong.

Aisha continued to be a part of the crew of the Outlaw Star as they dealt with the most dangerous criminals in the galaxy, the Anten Seven, as they continued searching for the Galactic Leyline, with the most dangerous being the powerful Hazanko. Despite their best efforts, Hazanko soon managed to kidnap Melfina and take her to the Leyline to have his deepest wish fulfilled. It was also during this time that Aisha develops a big sister relationship with Jim as well.

At the Leyline, Aisha split off from Gene, Jim, and Suzuka to deal with one of the surviving members of the Anten Seven so Gene could reach Hazanko. Though she succeeded in eliminating her opponent after assuming her full beast form, Aisha exhausted herself and nearly died before being rescued by her crew mates. In the end, Gene was able to rescue Melfina and slay Hazanko once and for all, ending the threat of the Anten Seven.

Despite being heroes for killing the Anten Seven, Aisha chose not to return to the Ctarl-Ctarl Empire to be reinstated to her former position, instead relegating herself to being a delivery girl after leaving the Outlaw Star's crew alongside Suzuka. However, she and Suzuka are reunited with Gene, Jim, and Melfina when they are brought out to the Outlaw Star by a tow truck ship when the Outlaw Star breaks down and needed repairs. It is only after the driver explains about his passengers he brought with him and was glad to be rid of that Gene, Jim, and Melfina return to the bridge to find Aisha and Suzuka there, deciding to rejoin the crew, though Aisha tries to blow off her reasons for coming back, but is happy to be with her friends again. With the crew back to full strength, they set off for the unknown.

Aisha has dark skin and white hair that she keeps tied in a braid with a large, gold ring, as well as a yellow headband which covers her forehead. Her attire consists mostly of a dark green jacket with detachable sleeves, a white breastplate, and various accessories, such as bracelets and a white collar with a golden bell attached, she also wears brown pants with armor on the crotch area alongside a light green cloth wrapped around her left thigh and white boots with black tips. Occasionally, she appears wearing thick brown pads which cover her shoulders. She also bears a small, blue triangular marking on her left cheek, which is also prominent in her beast form. She also sports a long, light green scarf she wears that has its free end hang down behind her that is as long as her braided hair.

Born into a proud family, Aisha takes great pride in her heritage and physical prowess. However, despite her sense of authority and entitlement, she is incredibly boisterous, clumsy and easy to anger, often causing her to act inappropriately at times. Her large ego prompts her to make remarks about the inferiority of other species compared to hers, and her hot-headedness usually results in her accidentally causing massive property damage.

It is possible that Aisha feels inadequate in regards to her position and image within the Ctarl-Ctarl Empire, elicited through her stranding on Blue Heaven and how she laments that the Empire treat her like she's "useless", feeling that if she returned, she would be quickly pushed to the side again due to her previous failure to capture Hilda. She also seems adamant to reinvigorate the pride of her own race, going as far as to illegally enter the Universal Strongman Tournament - an event where Ctarl-Ctarl competitors had been banned from entering due to a freak accident.

As a member of the Ctarl-Ctarl, Aisha displays enhanced, superhuman abilities - far surpassing that of any normal Terrans. She boasts immense strength, agility, great eyesight and impressive hearing, able to hear tiny frequencies from distances away. Her incredibly tough skin gives her a natural resistance to bullet-based firearms and explosives - to the point where she's able to swat bullets away and survive explosions - although she's still susceptible to magic-based weapons, such as casters. As well as this, most of her abilities can be amplified through a trait inherited by the Ctarl-Ctarl; the ability to metamorph into an animalistic, tiger-like beast. (referred to as "beast power" by herself)

Aisha and Jim in Grave of the Dragon

Animation cel of Aisha Clan-Clan in The Beast Girl, Ready to Pounce! 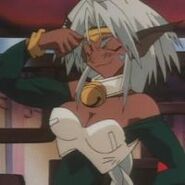 Aisha and Jim at the Heiphong Space Race.

Aisha in her beast form.

Aisha explaining the history of her Gejidabo stew.

Aisha discontent with the temperature of the hot spring on the planet Tenrei.

Aisha, as seen in the 1996 Outlaw Star pilot video. 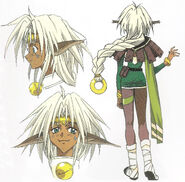