"Keep in mind there's no reset button on this game."
—Gene Starwind[4]

Gene Starwind (ジーン･スターウインド, Jīn Sutāuindo?) is an outlaw, pilot, gunman and jack-of-all trades. Business partners with eleven-year-old computer prodigy Jim Hawking, Gene runs a semi-legitimate business dubbed "Starwind and Hawking" on Sentinel III. When he was 14, Gene lost his father in what appeared to be a brutal Space pirate attack and has ever since been terrified of space. At 20 years old, he is offered the chance of a lifetime when he meets an outlaw named "Hot Ice" Hilda and acquires a state-of-the-art ship, the XGP 15A-II, and a biological android named Melfina, with the ability to find and unlock the galaxy's biggest treasure - the Galactic Leyline.

At 14 years of age, Gene lost his father during a trip in space at the hands of space pirates belonging to a golden ship. He was placed into an escape pod by his father and was ejected from the ship, surviving the attack.

Gene's most recognizable traits are his spiky, bright red hair, blue eyes and the prominent scars on his body. He is quite tall, standing at roughly six feet, and has a very lean-but-muscular body type. He also bears a large, red tattoo of a star on his Left shoulder. He also frequently dons a large cloak over his shoulders that often makes him look much larger than he really is and is often used to conceal the various weapons that Gene carries on him.

The death of Gene's father, Norman, when he was a teenager implicitly states that he was severely traumatized by the event and was likely left to fend for himself. His phobia of space would keep him grounded for the better part of his life. As a result, Gene is a very guarded man, hardly ever displaying his true feelings. Instead of confronting or showing his emotions to others, he puts on a brave and gregarious front. His tendency to overdrink may also be another way Gene copes with the trauma of his past.

Gene is equally overindulgent in his desire for women. A notorious womanizer, Gene is extremely flirtatious with women and easily aroused. He will often go to great lengths to get a glimpse of a naked woman, despite their objections. However, when in a similar situation with Fred Luo and his visible affection for him, Gene becomes uncomfortable with Fred's advances.

As businessman, Gene often takes huge risks on deals he assume will make his business, Starwind and Hawking, "easy money" at the expense of his partner, Jim, and their financial stability. As a result, should his schemes fail, he can end up looking foolish and even deeper in debt. Despite the wiser counsel of his friend, Jim, Gene often repeats his reckless business ventures with varying results. However, despite his lazy nature, Gene is capable of acting like a competent leader, though he generally only does so when the situation becomes serious enough.

In a fight, Gene can become cocky and overeager in situations that require defusing. Though he is confident in his abilities against an opponent, Gene is not afraid to admit that, if the situation were not in his favor, he would run. As a result, many opponents, like Twilight Suzuka, perceive his need for self-preservation as cowardice.

His constant bickering with Jim and Jim's constant rebuking of his immature behavior and tendency to act first and think later would suggest the two never see eye-to-eye. However, both Jim and Gene hold great respect for each other. Though he doesn't show it, Gene is compassionate. In the aftermath of Hilda's death, Gene takes on the responsibility helping Melfina discover her past, despite no prior obligations to do so. His own experiences in space as a teenager doesn't allow him to leave Aisha Clan-Clan stranded in space, as he aware of what it feels like to float through space without rescue.

Gene has very strong feelings for Melfina, but due to his guarded nature, he does not feel comfortable revealing this to her, even to the point where he isn't even sure of the nature of these emotions. But from the start, he develops a strong loyalty and attachment to her. Over time, the two have some confusion as they become closer, with Gene often recoiling, indicating a possible fear of intimacy. But when their journey brings them to the Galactic Leyline, Gene realizes the true depths of his feelings towards Melfina and proves his love for her by sacrificing her offer to use the Leyline to fulfill all of his material desires, stating, "There's nothing that the Leyline can give me. All I want is for you to return with me." This moment culminates in a kiss between the two, realizing that they are in love.

Gene is a seasoned gunman and able-bodied combatant. He thinks quick on his feet and acts quickly in combat to get the edge on his opponents. He is also quite creative; in one instance, he used a pair of light shields to block Suzuka's Bokken. His weapon of choice, a Caster Gun, while considered an antique, is extremely powerful and typically used as a last resort. The weapon's Caster Shells, depending on the type, can kill in a single shot, depending on the strength of the opponent. He is also skilled in hand-to-hand and melee combat. He is quite dexterous, capable of whipping out his unusual black bladed knife in mid-strike. Gene also happens to be a proficient liar, being able to switch from serious to jovial when confronting Harry MacDougall during the intermission at the Heifong Space Race. 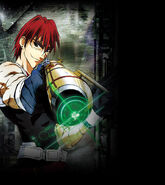 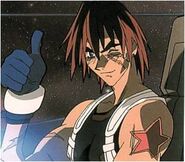 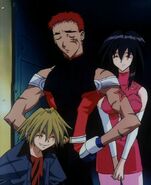 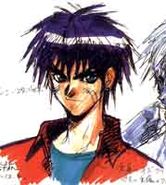