Gripper arms were initially used for non-violent purposes, on ships like EVA craft, specifically for repairing the hulls of ships or for transporting or moving heavy objects in zero-gravity environments. However, at some point in the past, Chinese pirates decided to use Grappler ships to aid them in crime, Dragonite transportation and combat. As a result, Grappler arms became symbolic of strength. China’s alternate use of Grappler arms inspired other pirates to use them in combat against each other.

Grappler ships became a staple in the devious activities of Outlaws and Space Pirates, to the point where they were able to overpower the Space Forces galaxy-wide. Frustrated with the situation, the Space Forces began to incorporate Grappler arms into the future designs of their own ships with the implication that their Grappler ships outclassed those of the pirates'.

The location of Grappler arms vary, depending on the ship, but appear to be commonly located on the underbelly or the sides of the ship. In particular, when engaged in "combat mode", the Outlaw Star cockpit modifies itself to better assist the pilot. Gene Starwind appears to use a specialized headset that feeds visual information directly into the center of his right eye.

Oppositely, however, a ship like the MacDougall Brothers' El Dorado appears to use no specialized equipment within its cockpit, and merely relies on the reaction time of the pilot. All Grappler ships use small cameras, which are jettisoned out into the immediate combat area, in order to gain a complete view of the area and so that pilots are able to pinpoint the location of their opponents at all times. However, cameras are almost useless in asteroid belts or debris fields, as there is too much in the immediate area for the pilot and the computer's A.I. to take into account.[2] 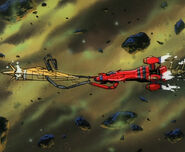 The Outlaw Star vs. the El Dorado

EVA craft using grappler arms as they were originally intended

Retrieved from "https://outlawstar.fandom.com/wiki/Grappler_arms?oldid=8080"
Community content is available under CC-BY-SA unless otherwise noted.