Hamushi (ハムシ, Hamushi?) was a member of the Anten Seven[1] and the Kei Pirate Guild. She attempted to prevent Gene Starwind from reaching the Maiden of the Leyline and Hazanko.

Hamushi first appears in a meeting where she and five of her fellow Anten Seven members are informed by Hazanko about Gene Starwind. When Hazanko says that he has sent Shimi out as the first assassin, Hamushi expresses her confidence in this decision.

When Hazanko and the Kei Pirates finally learn of the location of the Galactic Leyline, Hamushi, Jukai and Hitoriga accompany Hazanko into the Leyline.[2]

When the pirates were transported into the labyrinth of the Leyline, Hamushi was separated from the others. During Gene's journey to reach the heart of the Leyline where Melfina and Hazanko were, Hamushi blocked his path. Gene attacked her with his caster gun, but she deflected most of his attacks using her Tao magic.

Unimpressed by his attempts, Hamushi is caught off guard when he fires a #4 shell. She assumes the black hole created by the shell is no threat until she is affected by it. The #4 shell kills her, turning her body inside-out and sucking her into the black hole before zapping Gene Starwind of some of his life force.[3]

Hamushi is a beautiful woman who wears long, flowing, dark pink or purple robes and a helmet of the same color that covers the upper part of her face, leaving only her jaw exposed in clear view. She carries a hand fan with a frilled top that doubles as a defensive and offensive weapon when used in combat.[1]

A skilled temptress who knows how to use her sex appeal to catch her targets and opponents off guard, Hamushi is a woman self-assured in her abilities as an assassin and takes great pride in her physical beauty.[1] When pitted against the likes of Gene Starwind, she underestimated him on the basis of his lack of a reputation and the strength of her own power. When his attacks failed to harm her, Hamushi's arrogance allowed her to believe that she had the upper hand until she was killed by the #4 caster shell he used against her.[3]

Hamushi is said to lure men in with her sex appeal.[1] The possible underestimation of her deadliness based on her outwardly sexual nature may be used to her advantage as an assassin. She is also a skilled Tao-magic user, capable of powerful offensive attacks. Her skill with Tao magic is such that she has been able to make herself completely immune to most caster shells, up to the point when she can take a direct from one at point-blank-range without moving so much as a muscle and is left with no damage to herself at all. She was able to deflect or dispel the effects of #10 and #11 caster shells with little effort on her part. Her failure to defend against a #4 shell, however, ultimately cost her her life.[3] 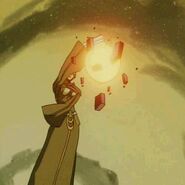