"Hanmyo. A prodigy of space combat with the use of cats."
—Narrator[1]

Hanmyo (ハンミョウ, Hanmyō?) was a member of the Anten Seven[1] and the Kei Pirate Guild. She was the third assassin sent out to kill Gene Starwind after the failure of Leilong and Iraga.

During her stay on the way station, she met Jim Hawking. Unaware of his relationship with Gene Starwind and the Outlaw Star, Hanmyo befriended Jim. The two bond and in a short amount of time appear to develop feelings for one another. Even her pets/co-pilots, Kemi and Mata, take a liking to Jim. Hanmyo, believing their meeting was fated, arranges to meet Jim later on during the day.[2]

When the Torarato is fully repaired, Hanmyo, Kemi and Mata set out to face the Outlaw Star a second time. Hanmyo fights the Outlaw Star with the confidence that she'll win, however, she is unprepared for the sudden counterattack from the ship. Unable to adapt to the Outlaw Star's counters, Kemi and Mata are killed and her ship is torn apart. Devastated, Hanmyo made an account of her ship's damages and calls for her cats before it explodes, killing her in the process.[2]

In stark contrast to the rest of Anten Seven, Hanmyo is a young girl rather than an adult. She has purple hair, pale skin, and wears a pink cloth wrapped around her forehead. She also wears a dark pink sash around her waist. She wears long, white sleeves with pink cuffs.

Hanmyo is playful both in and out of combat, and a strong believer in fate. Despite being a member of the Kei Pirates and one of Hazanko's personal assassins her brief relationship with Jim demonstrates that she is capable of genuine love and compassion. She admits to Jim that he was the first person to give her flowers. Her relationship with Kemi and Mata shows that she treats the cats like equals as opposed to simple pets and was both enraged and saddened when they were killed in combat. Like the other Anten Seven members, Hanmyo is overconfident in her abilities as a pilot and an assassin to the point of underestimating her opponent which ultimately led to her tragic death.

The youngest member of the Anten Seven, Hanmyo is considered a prodigy in space combat.[1] With the help of the Torarato and its unique capabilities, Hanmyo is able to communicate with her cats, Kemi and Mata, on a verbal and mental capacity when all three minds are connected to the ship's systems. As a result, the design of her ship allows Kemi and Meta to pilot each grappler arm independent of her control.[2]

Outside of space combat, Hanmyo has been shown to be able to move fairly silently, able to sneak up on Jim, despite him looking for her at the time. 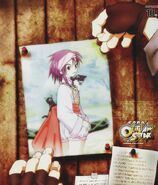 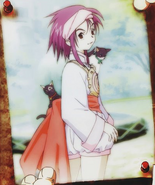 The pilot of the Torata

Hanmyo with Kemi and Mata at the park

Hanmyo becomes aware of her audience

Practice by the fountain 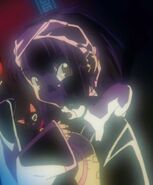