Outlaw Star Wiki
Register
Don't have an account?
Sign In
in: Articles without citations, Characters, Deceased Characters,
and 3 more

This article does not cite any references or sources. Please help improve this article by adding citations to reliable sources. Unsourced material may be challenged and removed..

Hazanko (破斬公, Hazankō?) is a member of the Kei Pirate Guild and leader of the 108 Stars. A key player in the creation of the ship, the Outlaw Star, Hazanko seeks ultimate power, through the mysterious ship, known only as the Galactic Leyline.

Hazanko is the leader of the 108 Stars, a brutal group within the Chinese Kei pirate guild, the largest and strongest of the four pirate guilds in the Toward Star Era galaxy. Though he is not the leader of the Kei pirates as a whole, Hazanko is one of the guild's highest ranking members. Because of the extent of his organization, the measure of his power and the methods he and his followers use to achieve their goals, Hazanko is considered by many to surpass even his fellow Kei leaders.

However, he is not known merely for his status, wealth or influence. Hazanko is immensely powerful with Tao Magic, his skill and power surpassed only by the Tendo King, leader of the Kei pirates, and the Tempa Emperor. Thus, Hazanko is respected and feared many within the guild.

Despite the wealth and power he gained, Hazanko's ambition was endless and his desire for power insatiable. He plotted to overthrow the guild leaders, the Tendo King and the Tempa Emperor, the only two members of the guild whose power and influence surpassed his own.

Searching for the Galactic Leyline

When the Kei pirates learned of ancient ruins connected to the Leyline called the "Grave of the Dragon", they interfered with the survey team already exploring the ruins and took it's secrets for themselves. Eventually the Kei pirates were able to find the Leyline but it's natural defenses were beyond anything they had experienced and were unable to enter it. Because there were still secrets to be revealed, Hazanko lauched the "Leyline Project". Hazanko financially supported the research project of Professor Gwen Khan, a brilliant scientist who decoded genetic engineering data uncover from the ruins which Hazanko provided him.

At the same time, the Kei pirates also began to construct an advanced ship which would be used to enter the Galactic Leyline. Knowing they could not develop such a ship on their own, the pirates used their vast wealth and connections to get a space forces group to sign on to the project.

Both branches of the Leyline Project proved successful, producing the XGP 15A-II, the most advanced grappler ship ever built, and the bio android, Melfina. Melfina would serve as both the ship's navigator and key to the entrance of the Leyline's core, adopting the role of the maiden who would open the gates of the Leyline and allow access to its power.

However, Hazanko suffered a major setback. Because of an "embarrassing deception" both Melfina and the XGP were stolen by an outlaw named Hilda. Hazanko and the Kei pirates were intent on retrieving them and thus began to relentlessly hunt down Hilda. Hazanko dispatched a group of his forces led by Soi Len and Roi Fong to eliminate Hilda and recover Melfina and the XGP.

In light of the Kei Pirate's repeated defeat at the hands of Gene Starwind, Hazanko became quite intrigued with the outlaw and spent months tracking Gene and his friends, keeping tabs on their location and activities. Eventually, Hazanko decided to send his own personal force to kill Gene and collect his property, this group was known as the "Anten Seven", the strongest assassins in the Kei Pirate Guild, each and every member with their own particular field of expertise and all completely loyal to Hazanko.

He advised them that while Gene Starwind was strong, his power should be nothing compared to their's, but unchecked, Gene's potential could cast a dark shadow on the pirates' position of power. Although patient at first, Hazanko became increasingly frustrated by his subordinates' constant failures to recover the Melfina and the XGP. After the fourth assassin, failed to kill Gene, he soon discovered a new way to breach the Leyline's defenses.

At the Leyline, Hanzako employed two powerful Tao masters in his staff develop a highly advanced, yet excruciatingly draining, ritual which combined Tao magic with advanced technology to force the dangerous gas clouds of the Leyline apart thus providing a window for a ship enter.

During the ritual, Hazanko was paid a visit by the Tendo King's overseer on board his personal grappler ship, the Geomancer. The overseer questioned Hazanko's actions saying he was not following the King's orders but Hazanko brushed him off saying he was doing just as ordered and has found a way into the Leyline. However, when the overseer demanded to know why, if this was the case, he had not reported his progress to the Tendo King and was simply opening the Leyline on his own, Hazanko had decided that he no longer needed to play the part and revealed his real intentions and ambition as the overseer had already suspected.

When the overseer attempted to kill Hazanko, he and his people were killed by the Anten Seven. Before departing, Hanzanko destroyed their ship. Knowing the Tendo King would grow suspicious of their absence, he moved quickly to gain entrance to the Leyline. When the XGP arrived, Hanzanko ordered the capture of the ship and retrieval of Melfina. The Outlaw Star was able to evade capture and entered the Leyline.

Hazanko grew concerned when the MacDougall Brothers appeared in the Shangri La with Gwen Khan. However, the the Tao ritual was complete and the method created a tunnel in the Leyline's clouds to allow the Geomancer to enter. Traveling through the tunnel, Hazanko attempted to capture the Outlaw Star. He nearly succeeded, but the untimely arrival the MacDougall's foiled his plans again. Hazanko was forced to proceed on to the Leyline. Landing in its cylinderal core, Hazanko left Tobigera to protect the Geomancer while Jukai, Hamushi, and Hitoriga accompanied him.

Once inside, Hazanko finally came face to face with Gene and demanded that he return Melfina to him. Before he could threaten them further, the Leyline transported Melfina to the gate and everyone else to random locations.

Weary of the constant setbacks, Hazanko had Jukai, use a powerful spell to take him directly to the gates of the inner Leyline. Upon reaching the gate, Hazanko was overjoyed to have Melfina back in his grasp to fulfill the purpose of her creation. Harry MacDougall tried to protect Melfina with his new android body, but Hanzanko broke his limps and left him for dead. Hazanko then suspended Melfina's consciousness and used her to enter the inner Leyline.

Inside the Leyline's core, Hazanko presented Melfina to the Leyline's A.I.. Hazanko was recognized as worthy and was asked of his desire. Hazanko wished for absolute power to crush his enemies. His plans were once again interrupted by the arrival of Gene who wasted no time in firing a rare and powerful caster shell to kill him. The power of the shell appeared strong enough to pull Hazanko into the ether of a miniature black hole, but the Tao master defeated the spell.

During the confrontation, Hazanko revealed everything about Melfina and her purpose to Gene and taunted and fed into her incorrect theory that Gene merely used her for personal gain. Now driven to rage, Gene fired his last caster shell at the same time as Hazanko unleashed a powerful Tao spell to kill him. The caster shell and Hazanko Tao magic both reacted and cancelled each other out causing a chain reaction that killed everyone in the process.

The will of the Leyline, however, kept them alive and revived their physical being. During the time, Hazanko's wish was granted. Imbued with absolute power, Hazanko escaped the Leyline, intent to use his power to conquer the entire universe as well. Hazanko used his power to merge with the Geomancer, absorbing its crew and Tobigera in the process. A giant made up of man and machine, Hazanko confronted was by the crew of the Outlaw Star, also granted power of the Leyline's with Melfina's help.

During the battle, Hazanko gained upper hand at first, intending to absorb Gene and his crew directly into his body. However, he was eventually overpowered by Gene, Melfina and the crew's power. The final blow landed on Hanzako destroyed him once and for all. 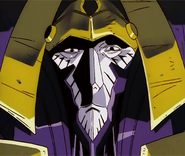