"Hitoriga. A man advanced in the martial arts much like the leader of the Anten Seven."
—Narrator[2]

Hitoriga (ヒトリガ, Hitoriga?) was an assassin in league with the Kei Pirate Guild and Hazanko's Anten Seven. Years prior to the events of Outlaw Star, he made an enemy of the assassin "Twilight" Suzuka when he killed her teacher and family.[1][3]

Chapter of the Galactic Dragon Vein

On an unknown planet, Hitoriga first met Suzuka when she was a simple village girl, learning martial arts under the advisement of her teacher. Hitoriga approached Suzuka's teacher with the desire to learn his techniques. Suzuka's teacher obliged Hitoriga's request, despite Suzuka's dislike of the stranger she believed wasn't worth training. Though Suzuka believed he was "sluggish", her teacher saw potential in Hitoriga.[1]

One day during Suzuka's absence, Hitoriga killed her teacher using his broadsword. He trained using one of her teacher's Bokkens until she arrived out on the training field. When she demanded what had happened to her teacher, he told her that he killed him.[1] Suzuka attacked Hitoriga with her own Bokken, however, Hitoriga bested her using tao magic. Suzuka then demanded to know who he was, he adopted the appearance of her now-dead master and revealed that he was a member of the Kei pirates under the command of Hazanko. Hitoriga bested Suzuka in battle using his tao magic, knocking her off the cliffside of the training field and leaving her for dead.[1]

During that time, Hitoriga killed Suzuka's family. The deaths of both her family and her master, drove Suzuka to train to become an assassin in order to defeat him.

"Just because I killed your entire family is no reason to hate me so."
—Hitoriga to Suzuka[3]

When Hitoriga and Suzuka cross paths again, the surviving Anten Seven members and the crew of Outlaw Star breached the protective barrier surrounding the Galactic Leyline. Hitoriga flattered that Suzuka chose to fight him instead of claiming the treasure of the Leyline, found it interesting that she would partner herself with the likes of the outlaw Gene Starwind.[3]

When he asked whether or not she loved Gene, Suzuka would only tell him if he defeated him. Hitorgia uses tao magic against Suzuka, but the two are evenly matched in their battle. During their fight, Hitoriga uses his magic to adopt the face of Suzuka and admits that he loves her. He believed, on account of their profession, they were one and the same. Suzuka dismisses his declaration, asserting her individuality as the most important thing to her.

Hitoriga deflects her next attack with a different technique and assumes he gained the upper hand until Suzuka admits that she allowed him to hurt her in order to experience the pain of his victims. Hitoriga attacks her again, Suzuka counters with a specialized move she created in the event that she encountered him again. Fatally wounded, Hitoriga asked what she used against him. After she tells him, Hitorgia collapsed, dead from his wound.[3]

Hitoriga is a man who's face is hidden by the cloth mask with the face of a ghoul. Much of his body is also hidden by the large robes he wears, which give him an the appearance of a massive man, both in height and stature.

Against Suzuka, Hitoriga his a man understated power. He speaks calmly, knowing he can manipulate Suzuka's emotions to a certain extent if she loses focus. Their encounter in the Galactic Leyline suggests that met again prior to entering the Leyline, particularly if Hitoriga admits being in love with her. Like other members of the Anten Seven, Hitoriga takes particular pleasure in his skill and profession. He shows no remorse for killing Suzuka's family.

A swordsman and martial artist, Hitoriga's abilities are said to be on par with that of Hazanko himself.[2] In addition to his impressive sword skills, Hitoriga is adept with tao magic. Specifically, he uses tao magic to "clone" the faces of his enemies, presumably to throw off or confuse his enemies.He can also fire powerful energy blasts. 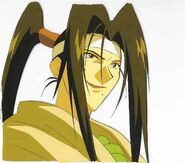 Animation of cel of Hitoriga as Suzuka in "Maze of Despair".

Hitoriga as he appeared in "The Seven Emerge"