Soi Len (老人) was a member of the Kei Pirate Guild.

"When the Hot Ice Melts"

While Hanmyo has a more relaxed and playful attitude in the general manner of a typical child, Soi Len is far more serious when carrying out orders or fighting dangerous foes. She also does not take defeat and failure well, as seen when she attempts to spend her final moments in an attempt to kill a fleeing Gene.

Like her partners, Guugaku and Roi Fong, Soi Len demonstrates a mastery over Tao Magic. Generally, the spells that she casts are not used for directly attacking a target. Instead, Soi Len uses spells that are more defensive and supportive in nature, such as creating barriers, tracking specific individuals, and adding power to other Tao Masters' own spells. 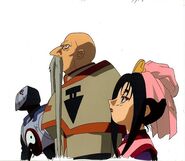 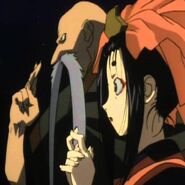