View source
watch 01:36
We're Getting Mutants in the MCU - The Loop
Do you like this video?
Play Sound

"WARNING: This article contains information from the series Angel Links"
Information regarding the series canonicity/timeline with Outlaw Star is questionable despite related lore and characters. Articles referring to specific elements revisited in Angel Links are to be kept separate in Outlaw Star articles until canonicity can be determined, if possible.

"Hunting for treasure is not a crime. I hope your dreams are as big as your heart, Gene."
—Valeria to Gene Starwind[3]

Valeria Vertone (ヴァレリア・ベルトーネ, Vareria Berutōne?) is a minor and supporting character that appears in Outlaw Star and Angel Links. In Outlaw Star, Valeria is a private security forces officer, part of the organization known as Angel Links. In Angel Links, Valeria is the tactician and co-commander of the pirate-fighting group called Links Group, commanded by Meifon Li.

Valeria Vertone worked alongside her colleague Duuz. Both were members of the private security detail, Angel Links, that worked out in the frontier and hailed from the Oracion System.[3] Velaria and Duuz operated out of the security forces warship, String 4.

During a routine check of a Heifong System, Valeria picked up on the fight between the Outlaw Star and an unidentified pirate grappler ship. They observed the battle from afar and moved in when the Outlaw Star attempted to raid the remains of the pirate ship.[3]

The Outlaw Star and its crew was taken to the Special Forces Base where it was investigated for piracy. Valeria sat in on Duuz's interrogation of Gene Starwind and Jim Hawking. Where Duuz appeared less willing to believe Gene and his crew were "Outlaws", Valeria appeared to be more sympathetic to their claims of innocence. When Gene explained that the information acquired from the pirate ship's A.I. detailed an attack meant to cripple the Space Forces base, Duuz and Valeria remained unconvinced, but Valeria suggested interrogating the other pirates they arrested to be safe.[3]

After the interrogation, Valeria showed Gene and the others the details of a ruined Midsummer Night's Queen, a civilian ship attacked by pirates. Gene and Melfina insist that Valeria check the timetable of the pirates attack after she revealed that the pirates repeatedly attempted to attack the Space Forces because of their position of authority.[3]

Shortly after the Midsummer Night's Queen docked and its survivors fled from the ship into the base, the base was attacked from the inside by pirates who infiltrated the complex using the civilian craft. Operating from the control room of String 4, Valeria could do nothing save monitor the situation and rally the base's forces to retaliate against the invasion. After Duuz is rescued by Gene, Valeria maintained contact with Gene as the Outlaw Star engaged the pirates and aided the work teams of the base. She offers the Outlaw Star the "job" of ridding the String 4 of the grappler ships attacking from the outside.

The String 4 rescues the Outlaw Star from being hacked by one of the final two grappler ships they were fighting against, before engaging the space pirate carrier. After the battle, Valeria and Duuz reward Gene and Jim with a suitcase of dragonite as payment for their work. Before they depart she asked whether or not they were aware of the Space Forces involvement with the development of a ship known as the "XGP". Before Gene denies any knowledge, Duuz dismisses the inquiry, claiming that they did not uncover any conterfit data on the ship in question.[3] Taking the hint, Valeria drops the issue altogether and wishes Gene and the Outlaw Star good luck on their journey.

Valeria once served as a Stagiest for the Einhorn Empire.[4] She was considered among her peers as the toughest tactical officer in the Einhorn forces and the best despite her youth. At some point she was romantically involved with fellow Einhorn officer, Matthew Lawrence.[5] However, during a mission, she performed a breach of orders that endangered the life of the Einhorn fleet and innocents. She was later court-martialed, her actions brought into question. Valeria dismissed the accusations of endangerment, reinstating that she was ordered to attack the enemy, not protect a fleet she believed held misguided opinions. Afterward, she was relieved of duty and left the Einhorn Empire altogether.[5]

Recruitment into the Links Corporation

In an attempt to establish a crew for the Angel Links, Kosei Hida brought to Links Group head, Meifon Li, the dossiers for Valeria Vertone and Duuz Delax Rex. Interested in what she had to offer, Hida set up a meeting between Valeria and Meifon. However, upon hearing the proposal, Valeria dismissed the offer and decided she didn't want to work under someone below her rank.[4]

Determined to recruit her, Meifon requests that Valeria give her three months to recoop her faith in the situation with the Angel Links. Mildly impressed, Valeria picked up a revolver and placed on bullet in the chamber. Stating that luck was also marker of ability, she handed Meifon the gun. Meifon pointed the loaded weapon to her and pulled the trigger. When the gun did not fire, Valeria decided to join Meifon's crew.[4]

Almost five years since her departure from the Einhorn Empire, Valeria found her place among the Links Group. During the height of the Links Group's success in and outside the Oracion System against Space Pirates, Valeria acted as second-in-command of the Angel Links and acting commander of the ship during Meifon Li's absences.

When Meifon begins to exhibit strange and violent behavior triggered by the name Goryu[6], Valeria attempts to investigate the name, based on the knowledge that she knew it was a old pirate long since thought deceased.[5] She learns that Meifon's parents, Chento Li and Lifon Li were killed in an accident on Oracion IV on June 30, which followed the immediate six million bounty on Goryu's head, July 1st.[5]

Troubled by the connection Meifon's parents could have with the pirate, she used the reappearance of her lover Matthew to her advantage. He manged to uncover knowledge of Chenho Li business relationship with Goryu prior to his rise as the founder of the Links Group. In exchange, Valeria gave him data regarding the Angel Links but chose to remain with the Links Group as opposed to returning to the empire like Matthew assumed she would.[5]

Concerned about what Matthew would do, Valeria armed the missiles on the Angel Links and cautioned Anne to keep a lookout on their immediate area. When Matthew used the Einhorn Ziedlitz to attack them, Meifon allowed Valeria to take command of the ship. Valeria used the Oracle Cannon against Matthew's fleet and disabled them, finishing them off with the Links Cannon. Valeria revealed to Meifon that she leaked partial information on the Angel Links to Matthew and was ready to be disciplined. Meifon, considering that the leak was part of Valeria's actions as their strategist, chose not to punish Valeria for her actions.[5]

When Meifon's uncle Ulgen and his niece Marcia are killed by Leon Lau[7], Meifon's true nature as a biological android is revealed in tandem with Lau's true identity as Goryu. Valeria and the others are helpless in their attempts to save Meifon from her pre-programmed disposition to kill Lau according to her "grandfather" Chenho's wishes.[8] When Leon Lau's charge, Yayoi is struck with a mysterious illness[9], Lau claims to be the only person who can cure her. Meifon walks willingly into a trap on the Mystel asteroid and Valeria, Hida and Duuz go after her and Yayoi. They fight off Lau's experiments and manage to save both Meifon and Yayoi from the destruction of the asteroid after Lau dies. Afterward, they part ways with Meifon who goes to live the rest of her days in normalcy before her death.[10]

In both of her appearances, Valeria is a tall and attractive blonde woman with blue eyes. For Outlaw Star, Valeria wears a white uniform with untamed collar length blonde hair. In Angel Links, her figure is considerably more curvaceous and she wears a red and black bodysuit with blue leggings. Further differentiating her from her appearance in Outlaw Star are large blue earrings and a red streak on the left side of her hair which now drapes all the way to her hips.

In Outlaw Star, Valeria is a strict, no-nonsense security officer who doesn't take kindly to space pirates or individuals she assumes to be of the criminal element. However, unlike her colleague, Duuz, she is perhaps more willing to give a character like Gene Starwind the benefit of the doubt in the name of being thorough and checking all of her bases.

A former soldier of the Einhorn Empire, Valeria is more relaxed in comparison to the strict and literal solder-esque personality in the company of the Angel Links crewmen. She is also the only character among the crew with a strong rapport with the Dragonite, Duuz, out of respect for one another's abilities as warriors. Valeria can be manipulative when she is seeking out information, but is largely compassionate and considerate toward those she considers friends or equals, even when they betray her.

In Angel Links, Valeria wields a tonfa and practices kickboxing. She trains often whenever she is off duty. Her skills as a pilot and tactician are examplified reaptedly during battle with the Angel Links, and in particular against her former allies, the Einhorn Empire.

In Outlaw Star, Valeria works primarily within the confines of the control room of the warship String 4, acting the security detail's eyes and ears during combat and remains cool under pressure. 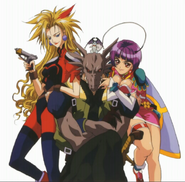 Valeria during her time as an officer of the Einhorn Empire. 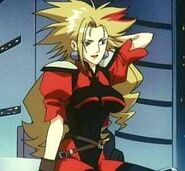